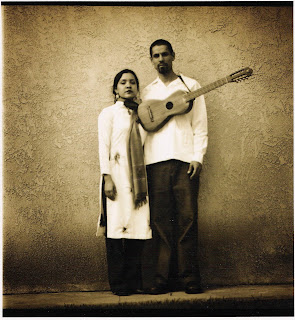 Friday September 12th was an end of sorts in a couple of different ways. First, it was the last show that Quetzal will play in Los Angeles before bandleaders Martha Gonzalez and Quetzal Flores move to Seattle. Second, it will be Quetzal's last show at the Temple Bar, which will be closing in it's current location at the end of the month.

Opening the show was MC Olmeca, whose set I missed. Not a great move considering that bassist Gomez and drummer Francisco Huete are also bandmates of mine in Monte Carlo 76 and Olmeca and I played together in Slowrider.
Second on the bill were Upground. This young band definitely play to their strengths, with super tight rhythm and horn sections providing a strong basis for their energetic mix of ska, cumbia, rock and other styles.

After Upground, Quetzal took the stage. Quetzal had invited me to sit in on a couple songs during their set. This was great because even though MC76 has been working so closely with Martha and Quetzal to get Marisela recorded and produced (so close to being done we can taste it) I've never actually never played with Quetzal before, so I was looking forward to it. With my luck, technical difficulties set in and I was able to actually play on only one song. Even so, this one song marked a mix of musical past and present for me. With Martha, Quetzal, Marisa Ronstadt, and Cisco on stage we had the present, with all of these people either playing on or being involved in the production of Marisela. Olmeca's improvised rhyming represented a past for me due to our years in Slowrider together. It's funny how memory works, because even though we were playing Quetzal's music once I heard Olmeca it took me right back to all the music we shared together in that band.

The closing of the Temple Bar is another milestone in Los Angeles music. This venue provided a place for the bands mentioned here and so many others to play thoughout the years and they always did it with a respect not found at other clubs. However, from the words of the owner it looks as though the club will reopen in another form elsewhere in the city, so this may not represent so much an end but another chapter.

The great thing about music is that it adds meaning to all of these stories without even trying. Make no mistake, this was Quetzal's show and there were many more guests besides myself who shared the stage that evening who have been more closely associated with the band throughout the years. All one has to do is see this band perform to realize their importance to music in Los Angeles. I think all of us will be excited to see what this next period in the band's development brings.
Posted by Unknown at 7:50 AM